In the previous post, we introduced the VBA Range object. This gave us the foundation of working with Ranges in VBA. In today’s post, I’d like to discuss how to get and set cell values through VBA. This will continue to build up our understanding of the VBA Range object and how to use it. There are several ways you can get and set cell values with VBA and I’ll do my best to cover all the necessities, but at the same time keeping it short and to the point. Let’s get started.

To get a cell’s value in VBA, we need to refer to it with the Range object and then call the .Value property.

We’ll use the following spreadsheet for our example. It’s a simple table with some names in it.

To get the value from cell A2 you can use this code snippet:

This will take cell A2 and put it in the variable val. Then we print out the value in the Immediate Window (which the value in our example is Joseph).

You can also set the range to a variable and access the value from that variable as well:

What happens if you use .Value on a set of cells?

Let’s change our previous code snippet to the following:

If you run this code, you will get an error stating that there is a type mismatch.

The problem is that when you work with a set of cells, .Value can only return a single value. So when we ask VBA to return .Value on our variable (which refers to multiple cells), the .Value property doesn’t know which cell we are referring to.

How do you get a single cell from a set of cells?

In order to use .Value to get a value from a cell, we need to refer to a single cell from the range of cells in our variable. The way we do that is with the Cells() VBA function.

The Cells() function is a way to take a range of cells and return a single cell from the set. Here is the function defined:

Take a look at the following code:

Here we took the range of A2:A5 and referred to row 1 column 1. Since the range variable cellRange refers to A2:A5, the first row is row 2 and the first column is A.

In order to set a cell’s value, you can use the same .Value property when referring to a cell. In this example, we’ll take A2’s value and change it from Joseph to John:

First we set the variable cellRange to A2. Then we said cellRange.Value = "John" which changes the variable’s .Value property. Remember, though, that the variable is a reference to cell A2, so whatever you do to that variable, you also do to cell A2 in the worksheet. Finally, we output the value of A2 into the Immediate Window to see that it changed.

We can also see the value changed in the worksheet after we run this code: 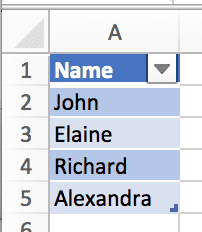 How do you set multiple cells’ values?

Remember how I said that you can only read from one cell using .Value? Well, when setting values, you can actually set multiple cells at one time by using .Value. Take a look at the following code:

If you ran this code, it would set all A2:A5’s cells to John: 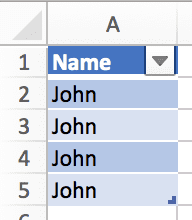 Well, maybe you’d actually want to do this for some other scenarios, like when you want a bunch of cells to repeat a value.

Let’s take a real example for a second. Let’s say we have two columns, First Name and Last Name. We want to take the Last Name column and place its value after the First Name’s value; essentially combining the values to make a single Name column. 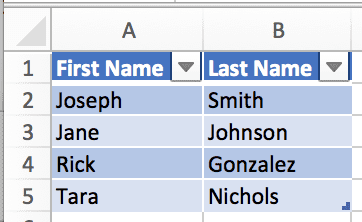 Our task is to combine the first and last name columns and place the result in column A. How do we do that?

One solution is to loop through cells A2 through A5 and then set that cell’s value to its own value, plus a space, plus the last name of the cell right next to it.

Let’s step through the code.

Here are the results of the code after we run it: 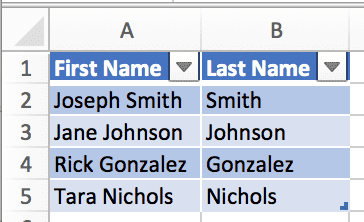 From here, we could change the A1 cell to just Name and delete column B altogether.

One last thing I’d like to touch on is when you use the Range() function, you can use a named range or table name instead of a range like A2:A5. In our first example, our data is in a table named Table1. To refer to the data of the table, we could use the following:

And to refer to the entire table, we can leverage structured references like so:

This will return A1’s value “Name” since the table starts in A1.

Honestly, there is so much to discuss with range objects in VBA. I’ll be touching on many more topics regarding ranges in VBA in upcoming posts such as:

I’ll come back to this post and put links to these posts as I create them.