Formulas are the basis of getting any calculation done in Excel.  Whether you need to sum a range of values, calculate forecast for next quarter’s sales, or even to perform text manipulation, all these things are done using formulas. Simply put, Excel without formulas would just be a fancy text editor (ok, maybe a little more than that, but you get my point).  Formulas are a crucial part of being efficient in Excel and if you’re brand new to formulas, this post can be of great use to you.

What are Formulas in Excel?

As mentioned in my An Introduction to Microsoft Excel, Excel uses a grid of cells to contain data.  Whether that data is text, numbers, or both, you can apply formulas to it in order to produce useful information.  For example, you can sum all of the data in a column, find the difference between two dates, or combine multiple strings together.

How to Write a Formula

Writing a formula in Excel is easy.  Here are 3 basic rules to remember before you write a formula:

You write your formulas by selecting the cell you wish to have the formula’s output be displayed and you can begin by typing the ”=” sign.  You can also click inside the formula bar to enter a formula or you can press F2 (which brings your cursor to the formula bar for the selected cell).

Here is an example of a simple formula: 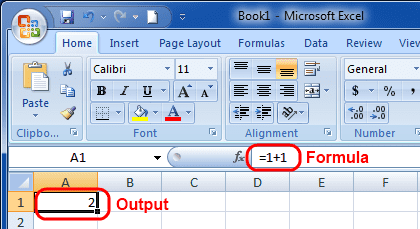 To edit a formula, there are 3 convenient ways you can use:

In my previous example, I added two numbers by entering the actual numbers into the formula.  What if I needed to grab a number from a cell?  That’s easy.  You can either type the cell reference by hand, or you can select the cell you want to reference while still editing the formula.

In the following image, notice how A2 has a weird dashed outline to it.  That’s because I recently selected it.

The output will still be 2 as shown previously.  Also, did you notice the colors of the A1 and A2 text?  They are blue and green, respectively.  Their cells are also outlined with those colors when you are editing the formula, but it’s hard to see that in the image because all of the cells are against each other.  Check out the next image below.  This time I clicked in the formula bar to better see the color outline.  This gives you a visual guide to where the references are made.  (Also, since I clicked in the formula bar, the colors are displayed there rather than inside cell B1.)

It’s important to know that when Excel evaluates a formula, it starts by looking at the references and converts them into their respective values.  So for the formula above, A1 converts to 1, then Excel converts A2 to 1 as well, and then it sums them together.  When the reference is a range, it is converted into what’s called an array, or a collection of values ordered in the way they were found (left to right, move one row down, then repeat).

For now, we’ll begin with a simple SUM() function.  In later posts I’ll be sure to get more in-depth with other useful functions.

The SUM() function does just what it says, sums up data.  It requires at least one argument, but can take up to 255 arguments.  Each argument “type” can either be a cell reference, a cell range reference, or a hand-typed number.  The argument types can be mixed and matched.  To follow our simple example of A1+A2, here are some ways you can use the SUM() function. 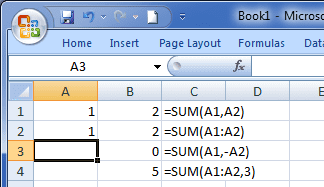 Allow me to explain how these 4 formulas work:

Start writing formulas! The best way to learn Excel is by actually playing around with it. You can start by check out some of the Commonly Used Excel Formulas.

You can also get started with Vlookup, one of the most popular formulas in Excel!